It was not until 15th October 1963 that the Daily Mirror introduced us to the word Beatlemania.

Accordingly there was no Beatlemania in evidence when three of the boys, Paul, George and Ringo, holidayed in Puerto de la Cruz between 28th April and 9th May of that same year.

In fact there was no reaction whatsoever. That was then – but now is now and Tenerife historian Nicolas G. Lemus with a little help from his friends organised a 12 day Beatle bash to celebrate the 50th anniversary of this inconspicuous visit from three members of the group which was to become probably the most commercially successful and critically acclaimed act in the history of popular music.

The guest of honour at the opening ceremony was Klaus Voormann (below, right), one of a batch of people who can claim the title of the 5th Beatle. He had met the group during their stay in Hamburg. More importantly for this article, his father was having a villa built in La Montañeta on the outskirts of Puerto de la Cruz. After recording their first LP, Please Please Me, the boys needed a break and as Klaus was in Tenerife for the purpose of furnishing the villa the three Beatles thought it would be a good idea to join him.

During the opening ceremony both Klaus and Nicolas touched on the episode where the boys offered their services free of charge to perform a gig at the San Telmo Lido Night Club on the sea front. The British owner, David Gilbert, apparently refused, saying that he didn’t want a group of long haired youngsters at his exclusive venue. I spoke to David’s daughter, Melissa. She laughed. Refuse them he did – but not because of their appearance – he had no choice. This was Franco’s Spain and it would have been impossible to get the necessary permission in time, if at all. To take the risk would have been stupid. Police informers and the dreaded “work inspectors” were here, there and everywhere. The club could have been closed down. We also had a guest speaker from Liverpool who is a guide on the famous Magical Mystery Tour Bus which shuttles visitors around the city pausing at birthplaces and venues, finally finishing at the Cavern Club. His name is Adrian McGrath (above, left), a lecturer with a difference – he’s fluent in Spanish, English and Scouse. The theme of his lecture was The Beatles – from Liverpool to Hamburg. But this was no ordinary lecture. Adrian added a little seasoning to his fayre which was the question – “What if”. There are many coincidences which occur during the early lives of the boys. Adrian pointed them out. Here’s an example: – What if George’s family hadn’t moved to Speke, where Paul was living, in 1950. What if George hadn’t won a place at the Liverpool Institute for Boys, which Paul was already attending, in 1954 causing them to travel on the same bus every day? They might never have met. The talk was littered with examples of synchronicity. A line from “All you need is love” – Nowhere you can be that isn’t where you’re meant to be.

In Puerto we had our own “What if” to add. What if Paul had drowned off our notorious Martianez beach? This is a terrifying experience for anyone who’s been there and brings Stevie Smith’s poem, I’m not waving, I’m drowning, to mind. (No it wasn’t Sylvia Plath who, incidentally, had committed suicide in the previous February).

This is how Paul described the incident – I got washed out further and further away. I yelled for help but those blighters on the beach just didn’t seem to hear anything at all. Sure, it seems quite funny now, especially when I tell you that I nearly came to blows with George and Ringo when I did finally get myself back on shore. Truth is, though, I really did feel I’d had my lot out there. It’s pretty scary when you think you’re in serious danger of drowning.

One of the final acts in the celebrations occurred on a beautiful Sunday lunchtime at the Dinamico Bar, Plaza de Charco when an appreciative gathering, including some day trippers, was entertained by the Puerto de la Cruz Municipal Band playing Beatle’s hits. The band was superb. At our table there were a few moist eyes when favourites were played. Nostalgia ruled for a while but we pulled ourselves together for Hey Jude and performed our na-na’s in various keys.

Was the Beatle’s Celebration a success? Personally I thought that it could have been supported better by the ex-pat community, but the festival had not been pitched in that direction. It was a Spanish occasion and the organizers are to be congratulated for their enthusiasm. Nicolas G. Lemus, supported by the vice president of the Association of Hotels for the province of Santa Cruz de Tenerife, Enrique Talg, has proposed to the island Government that Paul McCartney be declared an Illustrious Visitor to Tenerife.

My friend, local artist, José Desamers made the pencil on paper drawing (top) to celebrate the visit, with the Beatles leaning over the sea wall with the famous old church in the background. He acknowledges that he has included John Lennon but insists that it’s his tribute and he can do what he likes. José presented the original to Klaus Voorman.

And therein lies the rub. The Beatles didn’t visit Puerto de la Cruz, 50 years ago. They were one short. 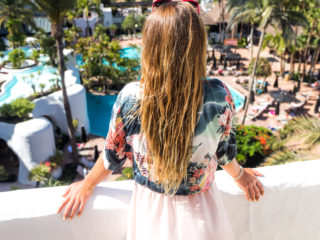