In the third of our series of holiday destinations that are easily accessible from Tenerife, we take flight to the Eastern Canary Island of Lanzarote. Fourth largest of the seven main Canary Islands, a 50 minute flight from North Tenerife will take you to a landscape which is worlds apart from its mountainous neighbour. Lanzarote owes its looks to its violently explosive past, its wind kissed meteorological conditions and the vision of its most famous son, César Manrique. Tenerife Magazine’s Guide to Lanzarote
First impressions of Lanzarote are that it seems empty and barren. Lacking any great height, forested or mountainous zones, the arid land undulates in a myriad shades of brown and gold, across endless fields of lava and volcanic ash, studded by volcanic cones and splashed with green vines set into neat circles.

Life moves at a much slower pace on Lanzarote where the tourism has to fit in with the culture rather than vice versa. Outside of the city and the main resorts, roads are largely devoid of cars, two wheels being the preferred mode of transport on an island which is rapidly becoming Europe’s biggest winter sports destination. Here, the wind governs everything, from the ‘toys” fashioned by César Manrique which turn and play in the breeze, reflecting the sunlight across the landscape, to the boards and sails of the surf dudes and the yachting sets who come to play off Lanzarote’s coast.

An altogether quieter alternative to Tenerife where high rise hotels are conspicuous by their absence, the golden beaches are natural, outside of the main resorts entertainment is largely of your own making and everywhere you look, someone is clad in sports gear and pitching their skills and stamina against the elements, Lanzarote has a surprising diversity of attractions to offer holidaymakers.

A quick guide to Lanzarote’s resorts: Puerto del Carmen
Lanzarote’s original and most densely populated resort, nestled into the headland beneath the Femes Mountains on the south east coast, Puerto Del Carmen has sun, sea, sand and everything a holidaymaker could possibly want within flip flop distance of their hotel or apartment. Lively and bustling, this is the resort for clubbers, singles and families with a huge selection of bars, shops, clubs and restaurants, many of them geared specifically towards British tastes.

The Playa Grande beach stretches endlessly and provides an ideal spot to soak up the resort’s default setting sunshine while the old harbour has some nice fish restaurants and is a great place to chill with a glass of MalvasÃ­a and watch the steady stream of holidaymakers pass by. Costa Teguise
A quieter and more sophisticated resort then Puerto del Carmen, Costa Teguise is popular with families and with sports enthusiasts, particularly windsurfers who enjoy riding the waves at Playa Las Cucharas where international competitions are staged. Restaurants and cafés have more of a Canarian feel to them here but there are still plenty of bars geared towards the British market and a good variety of shops. Playa Blanca
Move down the coast and upmarket to the resort of Playa Blanca where you’ll find a quieter pace altogether and the island’s yachting set in nearby El Rubicon. Blessed with the beautiful Papagayo beaches nearby and a lovely promenade which stretches all the way to the lighthouse at Pechiguera, Playa Blanca is favoured by the more discerning holidaymaker.

You’ll find some nice tapas bars and less designer-inclined shops around the seafront in the centre of the resort and if the fancy takes you, you can hop on a ferry to Fuerteventura whose white sand beaches shimmer in a heat haze on the horizon.

What to see in Lanzarote:
Timanfaya National Park. Lanzarote’s most popular day destination, Timanfaya National Park is the scene of the world’s longest recorded volcanic eruptive incidence which lasted for six years from 1730 to 1736. You can watch as the still-fiery ground consumes a dry branch in flames, turns water to steam in a split second and cooks your lunch over a volcano oven. Jameos del Agua. The underground lake which César Manrique turned into a magic grotto of sculpted volcanic rock and tropical landscaping which plays with the reflected sunlight and acts as the surreal venue for a restaurant, a coffee bar and a night club. Cueva de los Verdes. A six kilometre long volcanic lava tube of low, rock passageways opening into vast underground caverns where one kilometre has been opened to the public for you to play out episodes of Scooby Doo in the spooky darkness. Doubles as a venue for classical music concerts where you can hear Baroque in a rock.

Alegranza and La Graciosa. Lanzarote’s stunning castaway islands which lie off its north coast. Alegranza is off limits to humans and is a nesting ground for rare sea birds on their migratory route whereas La Graciosa is a traffic-free(ish) paradise where shoes and clothes are optional and the buildings are of the Robinson Crusoe school of architecture. The Cactus Garden. Another César Manrique wonderworld where a thousand varieties of the spikey ones flourish amongst black, volcanic beds weaving their way past a waterfall and beneath a windmill. Villa de Teguise. The lovely former capital of Lanzarote which sits inland above the Costa Teguise resort. Cobbled streets, traditional restaurants, artisan shops, a huge Sunday morning market and a Piracy Museum in a castle on the hill await swarthy dogs, culture seekers and bargain hunters. Avoid Sunday mornings to have the place to yourself.

How to get to Lanzarote from Tenerife:
Binter Canarias fly five times a day from Tenerife North airport to Lanzarote. The flight takes just 50 minutes and gets you to within easy taxi or bus reach of all the main resorts. Flights average €150 return for non-residents, €80 return for Canary Islands residents.

Where on Tenerife is this? Photo Challenge #4 2012 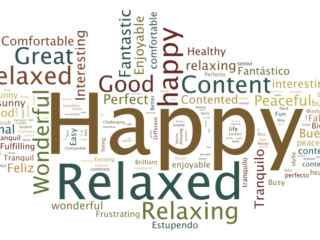