El Médano’s trademark winds and surf dude ambience are preparing for some insane aerial acrobatics and slick wave riding from the world’s most extreme sailors as the PWA (Professional Windsurfers Association) World Tour gets underway tomorrow (July 14th) and runs through to July 20th. The wave fleet have already descended onto Tenerife for this, the second round of the men and women’s wave tour and they’ll be honing some of their most daring manoeuvres in a bid to grab a slice of the €45,000 prize point and precious points in the world rankings.

Wave Conditions
Wave king and event organizer Dany Bruch (Starboard / Severne / AL 360) is no stranger to El Médano’s windy ways, seeing as it’s his home. The PWA asked Dany to provide them with an insider’s view of what to expect from Tenerife’s coolest resort over the competition:

“It is an amazing spot, the wave is a left hander and it is formed at a point break, usually you can fit in three or four frontside turns. The wind is a little lighter than in Pozo, I sail on 4.2m or 4.7m for the majority of the time,” says Dany. “The jumping is really great in El Medano, the wave comes straight at you so you can go really high. We can expect to see super-fast double forwards and massive backloops, but I think the wave riding will be the most impressive thing as a lot of the sailors prefer that”¦ just watch out for the rocks!”

Spectators
For anyone who’s wondering if it will be worth heading down to the southeast coast to watch the competition, Dany has this advice:
“There will be loads to do at the site; there is a large sandy area behind the beach away from the wind where the main tent will be. During the day the tent will be a chill out area with smoothies provided and really comfy chairs, but at night it will all change and become the party area with some great DJ’s coming down to entertain the crowds.
Alongside all of that we also have a seven meter climbing wall, loads of stands for the local surf shops and restaurants, a Canarian football kicking stand and a massage crew. We even have the chance to win a Renault Clio. There will be heaps going on and it promises to be loads of fun.” Contenders
The PWA have given us the low down on who to keep an eye on over the next seven days:

Men’s Fleet
Philip Koster (Starboard / NeilPryde / Dakine) stole the show in Pozo and won the first event of the year. Expect to see ankle dry pushloop forwards from Koster and perhaps another attempt at the triple forward loop. He is sure to be going big in order to defend his position at the top of the ranks.
The 2010 world wave champion Victor Fernandez Lopez (Fanatic / North / MFC) will be hoping to break past the wonder kid Koster in order to re-assert himself at the top of the pile. Fernandez Lopez is famous for his smooth wave riding and radical backside 360’s.

High-risk wave rider Dario Ojeda (Tabou / Simmer / Dakine / MFC) delivered an incredible show in Pozo, defeating many of the big names in the double elimination to earn himself third on the overall scores. Expect to see Ojeda smacking the lip at the last minute to earn extra points from the judges.
The freestyler turned wave champ Ricardo Campello (JP / NeilPryde / MFC) will be hungry for revenge after a tough round in Pozo saw him slip down into fourth. Make sure you have your camera ready for Campello’s huge aerials and super-fast double forward loops.
In between ensuring everything is running smoothly local ripper Dany Bruch (Starboard / Severne / AL360) will be making use of his local knowledge to destroy his opponents, with his aggressive wave rides and mind-blowing wave 360’s. Women’s Fleet
Having retained her title in Pozo for the twelfth year, Daida Ruano Moreno (Starboard / Severne) will be looking to continue with her winning streak in Tenerife. Daida stormed into first place in Pozo landing an incredible double forward loop and the most impressive front side aerial of the competition.
Hot on her heels, twin sister Iballa Ruano Moreno (Starboard / Severne) will be giving it everything she has got to knock her sister down from the top spot. Iballa is certainly not afraid of going for the largest manoeuvres if it means she scores maximum points.

Having stormed through the fleet in Pozo, Karin Jaggi (Patrik / Severne) sits in third; she will be looking to fend off any advances from the rest of the fleet with her flawless forward loops.

Nayra Alonso (Fanatic / Severne) famed for her elegant bottom turns and precise cutbacks will be taking advantage of Tenerife’s longer rides in order to make her way into the top three. Keeping up with the action
Tenerife Magazine’s Colin Kirby will be waveside at El Médano, hoping to catch the action on camera and to interview some of the sailors so we can look forward to Colin’s report later. But to keep up with all the excitement as it happens, tune in to the PWA Live Streaming from 2pm on Thursday 14th July when, weather permitting, sailors take to the waves to kick start the competition.

It should prove to be a spectacular event. 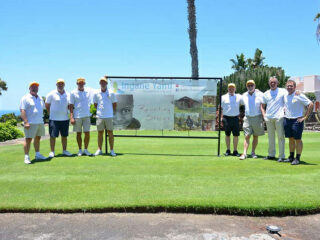