Ground Shaking News from El Hierro
The minor earthquakes which have affected El Hierro for the past few months finally caught the attention of the outside world last week. Only a couple of days after an expert had declared that the risk of eruption was unlikely, the island was placed on a yellow alert, schools were shut, tunnels were closed and around 300 people were evacuated from the Frontera region.

The evacuation was more to do with the risk of landslides than anything else as increased seismic activity resulted in tremors that registered up to 4 points on the Richter scale.

Comments to a report in the online version of The Daily Mail newspaper showed that some American readers were becoming borderline hysterical after confusing El Hierro with La Palma; they believed this is the one that’s going to send a giant tsunami across the Atlantic to wipe them out ““ it’s not. President Obama was even accused of keeping the American people in the dark over this perceived threat to their lives. There wasn’t much evidence from that quarter of any concern for the islanders.
Some British readers on the other hand were more worried about the impact on their holiday plans to Tenerife. Mostly the comments included a lot of tosh and nonsense that would have been funny if people didn’t take them as gospel. The Daily Mail, on this occasion didn’t sensationalise the report too much, but they did stretch reality by describing El Hierro as being popular with British tourists.

The threat of eruption in El Hierro has subsided slightly although the yellow alert remains and there is still increased seismic activity with regular tremors. However, experts feel the the centre of magma activity may be moving south and towards the sea.

An expert in Madrid says that an eruption in the coming months is likely but it will not be dangerous as it’s unlikely to be explosive. The irony is that if it did happen on land it would probably attract many more visitors to the island than normal.

Calling Captain von Trapp
The big Christmas & New Year show at the Tenerife Auditorium this year will be The Sound of Music. Organisers of the show have just announced that they’re looking for someone to take on the Christopher Plummer/Jason Donovan role (whoever springs to mind depends on your age). If you think you’ve got what it takes, send a CV to carmenvertigotours@gmail.com. Auditions are due to be held at the Auditorium on Monday 10th October. Candidates need to have learned the words to Edelweiss (Spanish Trapps might struggle to get their lips around that “W’). It wasn’t clear whether turning up in lederhosen and sporting a Tyrolean cap would help or hinder the cause.

Maná ““ A Mammoth Success
A few weeks ago we compared the number of tickets sold for Mexican rockers Maná’s ‘Drama Y Luz’ show at the end of September with the numbers who attended the annual summer concerts at Golf Costa Adeje. So what was the final tally? An army of over 50,000 fans turned out for the two concerts in Santa Cruz and Las Palmas. Remind us again how many turned up for Michael Bolton, Simply Red et al? The point is this; choose acts wisely and avoid those way, way past their sell-by date and the fans will show up on Tenerife. It’s not rocket science.

The Guardian, Observer & Guardian.co.uk Travel Awards 2011
These prestigious travel awards were held in Tenerife last week; not that you’d know it from the limited online coverage. This wasn’t helped by the fact that there was no wi-fi access at the black tie event held in the Finca Punta del Lomo banana plantation in San Miguel de Abona.

So who were the big winners on the night?

Tenerife and The Canary Islands didn’t get a look in.

And finally the TIT (This Is Tenerife) of the week award goes to…Anyone at all in authority involved with planning ““ or lack of.
There’s a joke on Tenerife that every road has to be laid 4 times. After it’s laid the first time someone points out that they’ve forgotten to replace the electricity cables so it’s dug up and relaid. Then they remember that the water pipes need replacing ““ dug up and relaid. And then finally it’s noticed that the manhole covers are missing…

It’s a joke with more than a foundation of truth. This week it dawned on planners at the troubled South Hospital that the opening of the hospital would attract more road traffic and the current road system would collapse with the increased volume. Therefore they need to develop plans to improve access to the hospital…urgently.

WHAT! In all the years that the hospital has been in construction, have those involved really not considered the impact on the access roads? The answer is apparently not.

You really couldn’t make this stuff up. 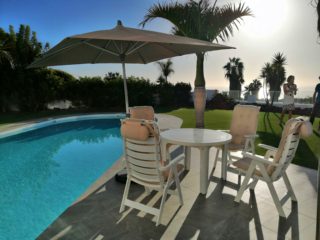