While in Tenerife in December I got the chance to go paragliding with Airsports Tenerife! After the initial excitement had worn off I began to wonder exactly what I had said yes to…

At 15:30 on the day of the paragliding I met my pilot Simon at La Enramada beach near La Caleta. Yes, I wasn’t going by myself, I had The Best Pilot for my tandem paraglide. There is a great bar at this beach called Coqueluche, and while I was offered a drink before my flight, I thought it better to decline.

The vans were packed with all the gear, and the different pilots and other guests like me jumped in, and we were on our way up into the mountains. At the top, we unpacked the vans and hiked a little way to the Los Pinos take off point at around 800 metres high. Simon and I would be taking off first. 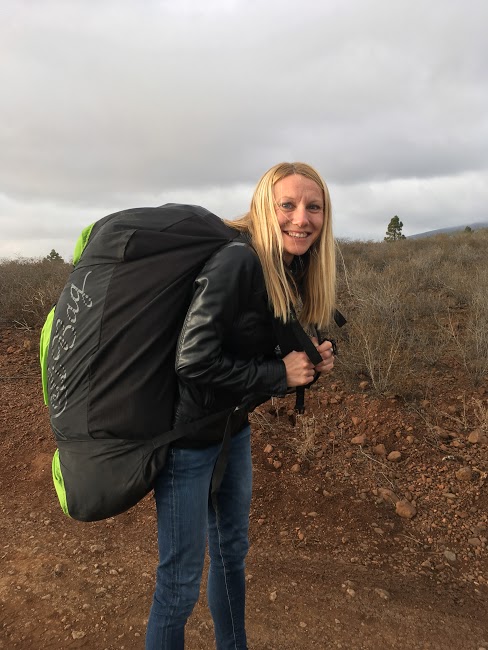 I was strapped into the harness and attached to Simon, and while he was watching for the best conditions for take off, I was standing there utterly terrified.

Suddenly the conditions were right, and Simon told me to run and then we were up in the air. It really does feel like you are a bird in flight just gliding over the mountains, and I soon relaxed and started enjoying myself. The views were amazing and like nothing I have ever experienced before, even though I do a lot of mountain hiking. This was a totally different feeling. 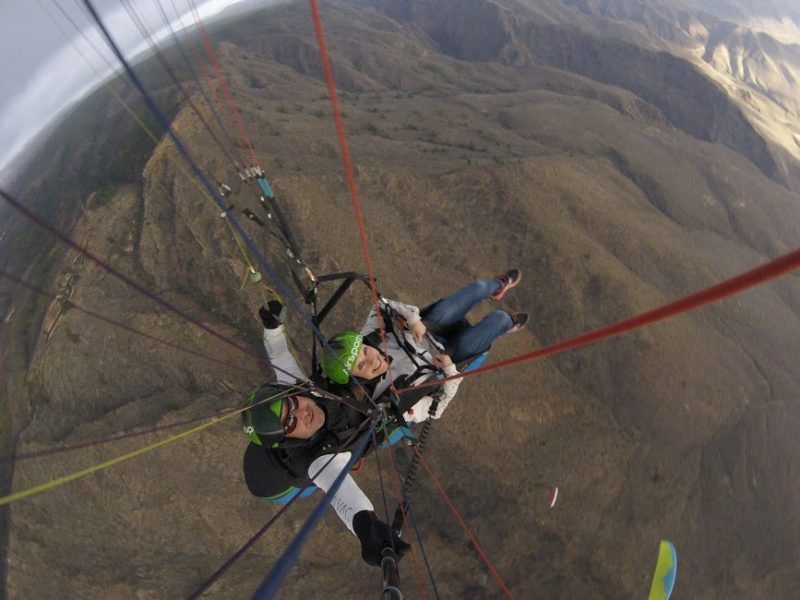 After a while Simon took us up into the clouds and allowed me to have a go at flying the paraglider myself. I don’t think I was very good at it, but I’m so glad I got to give it a try. I’d love to tell you more about what happened in the clouds, but like Simon said, ‘What happens in the clouds, stays in the clouds’. 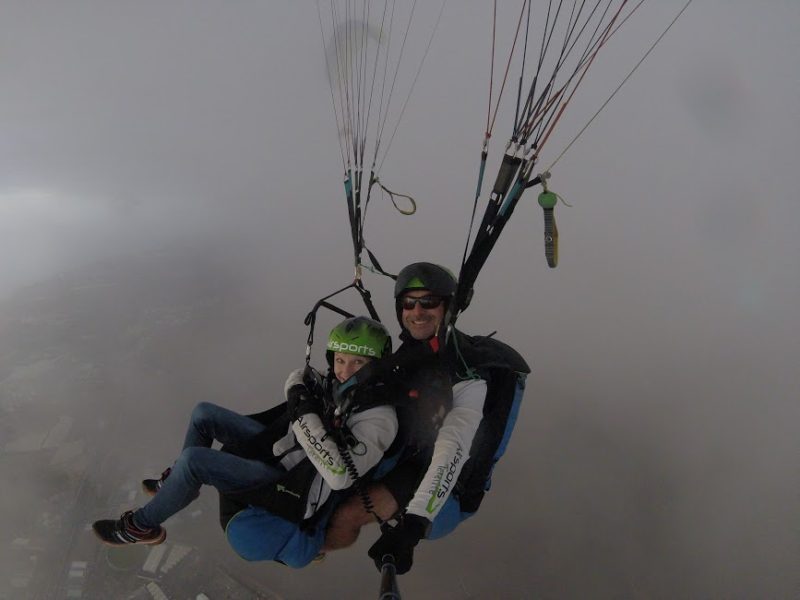 We went up to around 1450 metres and to be so high up and flying free is surprisingly peaceful and relaxing. It was an amazing sight to look down at the other paragliders way below us. 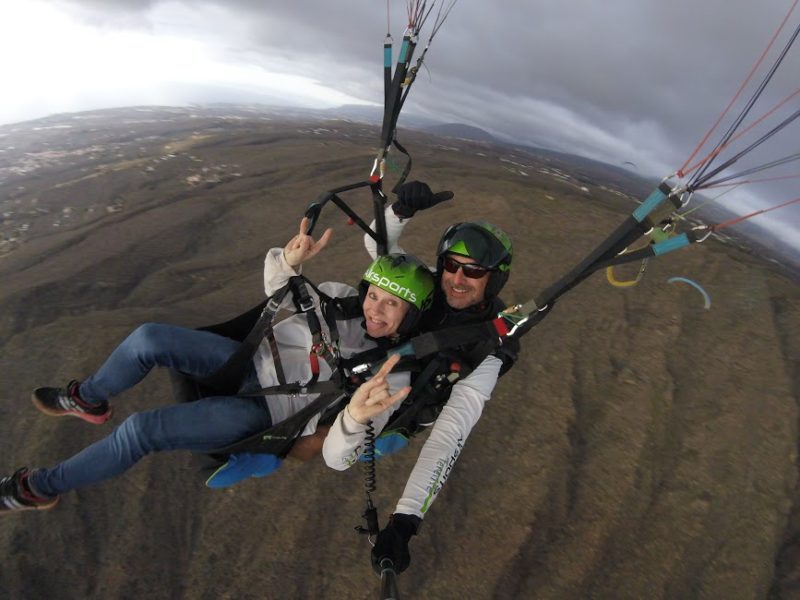 We began heading towards the coastline and out to sea. We were still around 800 metres high once we were over the ocean. Then Simon said it was time for some fun and let’s go upside down! This I was not brave enough for…maybe next time. So instead Simon did some crazy turns, and yes, I admit it, I screamed on almost all of them! 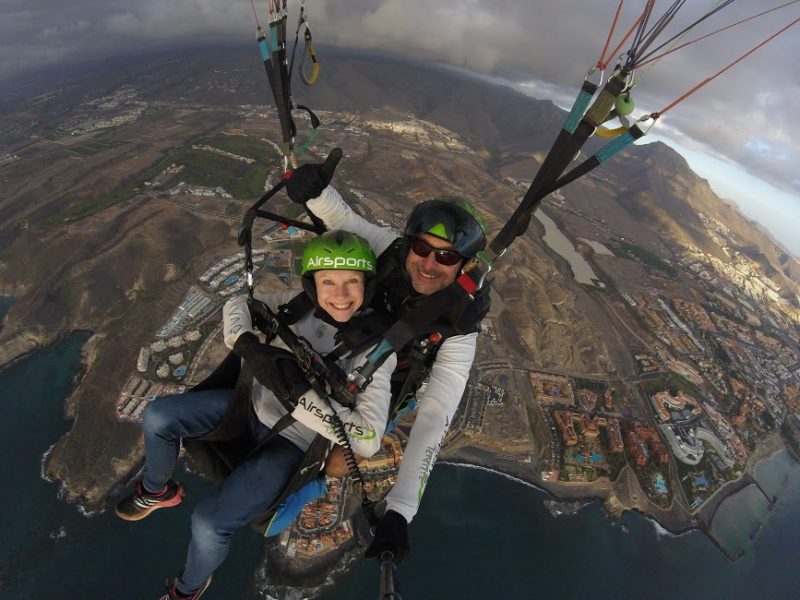 It was time to head to the landing point back at La Enramada beach. As we were coming in to land I said that I needed to stay on my feet and look cool in front of all the people watching. This didn’t happen, and instead I went down on one knee as though proposing to Simon. Afterwards it was time for a glass of cava while watching the most magnificent sunset I have ever seen. 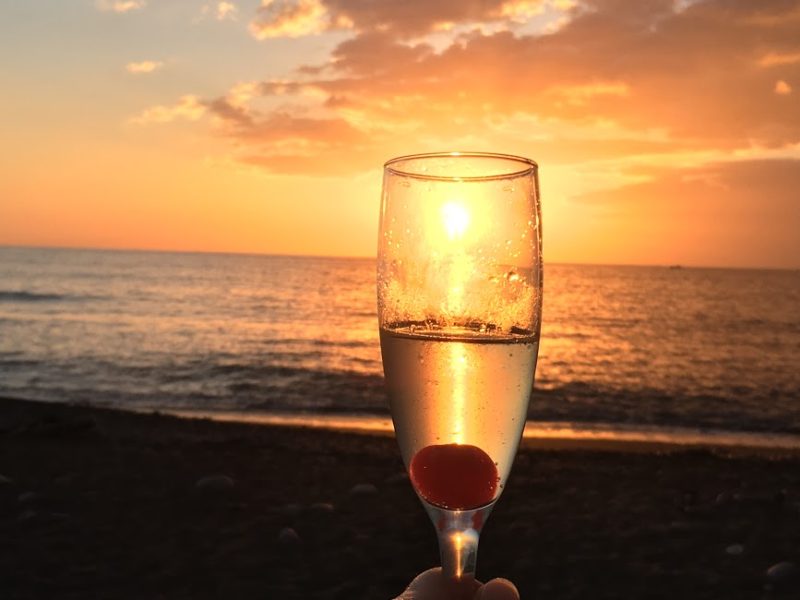 The whole experience is recorded on a go pro camera and you get the SD Card after your flight. What a great souvenir to take home. You can read more about what to expect by visiting the website at airsportstenerife.com. 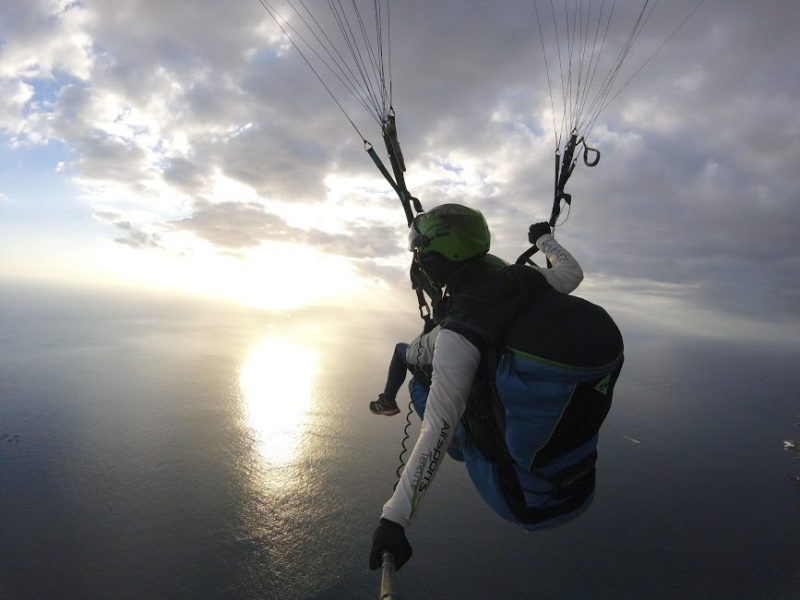 If you are a little unsure if you want to try paragliding then head to La Enramada beach at around 16:30, have a drink at the beach bar, and watch the paragliders coming in to land over your head. Make sure to do this near the start of your holiday, as I can almost guarantee that you will be begging the pilots to find
time to schedule a flight for you.

Though I was terrified at the start, I soon discovered that paragliding is simply fantastic, and I highly recommend everyone to give it a go while in Tenerife. In fact, this paragliding experience I had with Simon and Airsports Tenerife is The Best Thing I have ever done!!

Text and photos by Lynne Knightley

If you wish to read more about amazing things to do in Tenerife, then take a look at Lynne’s excellent guidebook. 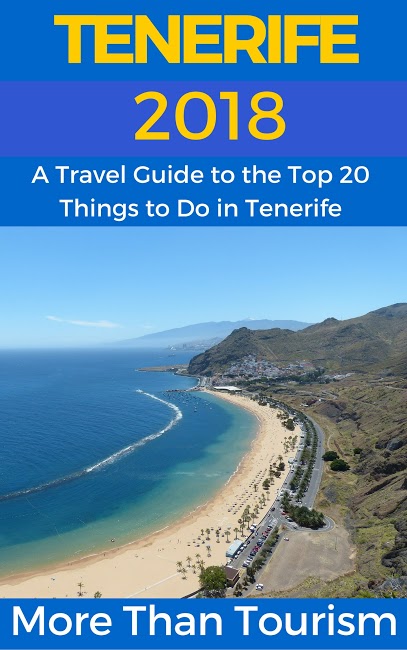 You can also follow Lynne via her social media accounts: 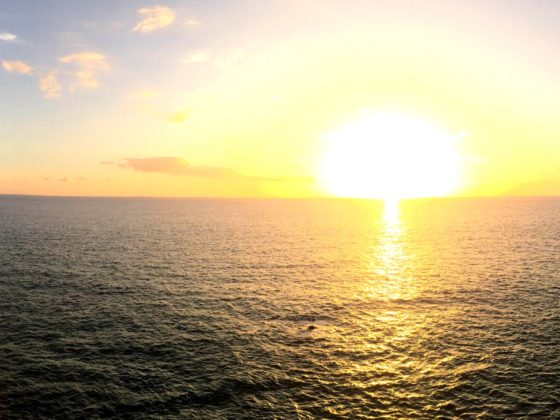 The Edge of Perfection for Tapas at Pearly Grey 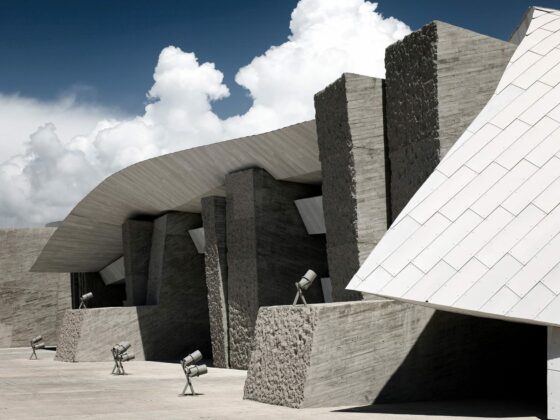