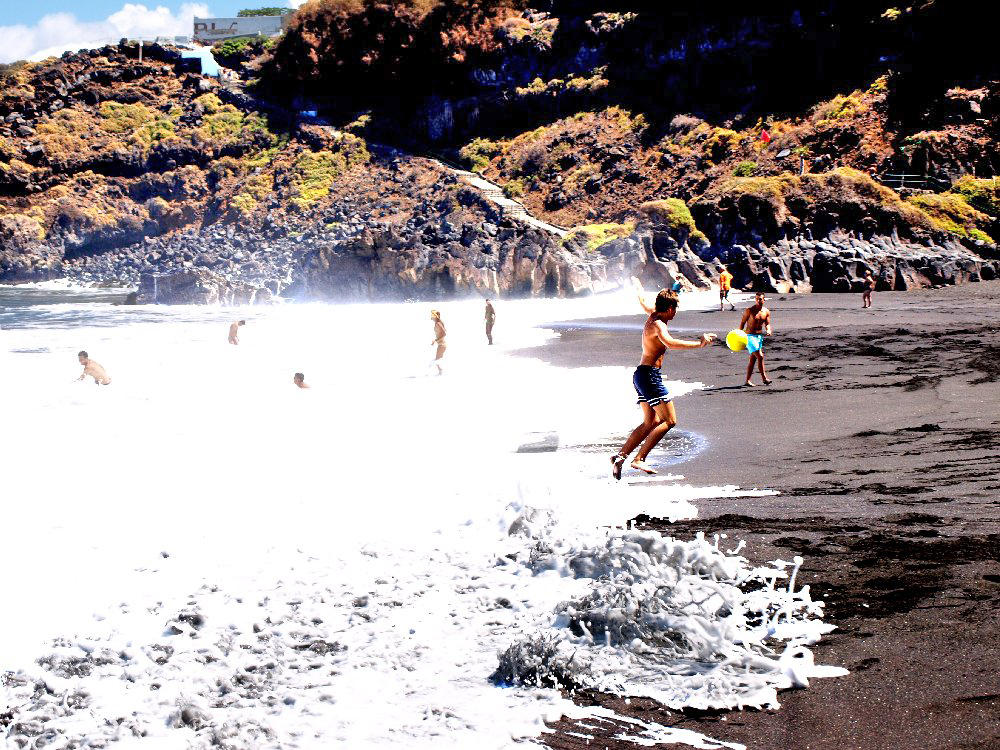 I spread my towel midway between waves which resemble stampeding white horses and the pale blue shack of a beach bar nestling below the cliffs. There’s another cave bar at the back of the beach, but I haven’t figured out yet whether it’s open to everyone and the mean looking hound standing over the entrance to the cave deters me from wandering over to find out.

Bollullo’s waves are usually tsunami-sized and although great fun to battle with I need some R&R time before I try anything remotely resembling energetic. Getting to Playa Bollullo involves either negotiating a single track road, or walking in the heat through the banana plantations for about thirty minutes from La Paz in Puerto de la Cruz – which is the way I’ve come. The beach lies sheltered, almost completely hidden from view from north Tenerife’s main tourist resort a few kilometres away, in a large horseshoe shaped cove in the cliffs. A twisting path links the Bollullo Restaurant on the cliff top with the black beauty of a beach below and halfway down is a curio of a cave filled with hundreds of effigies tied with twine and placed in crevasses in the rock for good luck. They lend the cave a magical, slightly spooky air.

Bollullo’s “˜off the beaten track’ location and limited access keeps it out of bounds to the masses. It’s too far for any tourist who doesn’t like to have to trek any distance to a beach, so most of the people around me are groups of young Canarios. They sit cross legged in circles chattering excitedly, usually all at the same time, or frolic in the surf with a confidence found in those who grow up beside the sea. 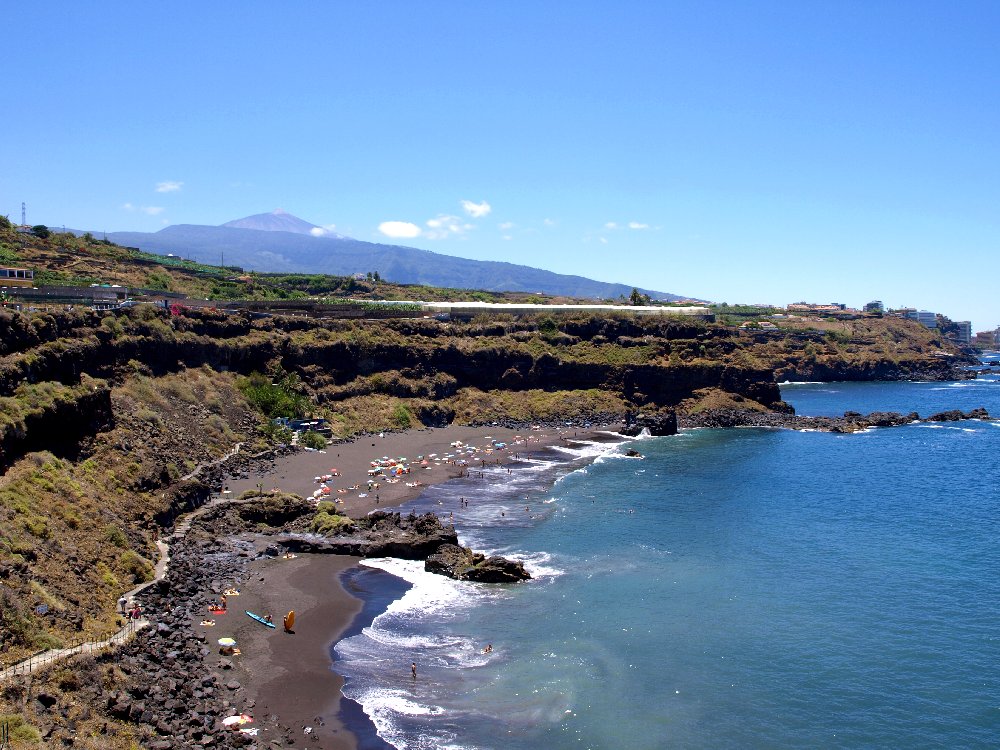 A large rock which looks as though it has simply melted into the sea breaks up the shoreline. As wild waves crash around it, a guy in his sixties squeezes onto a narrow ledge. A Bollullo special batters the rock, knocking him from his perch. You’d think he’d take the hint and sound a retreat, but instead he tries to sit on the ledge again proving the old adage “˜there’s no fool like an old fool’. Another wave sweeps him from his stone seat; this time his head narrowly misses a rocky outcrop and he finally gets the message.

I become aware of a presence to my left. A bleached blond lifeguard who looks as though he should be patrolling Bondi beach is doing sit-ups on the sand without even using his arms behind his head as leverage. He has a stomach which my mother could have done her washing on. I feel like a beached albino whale beside him, so I grab my clothes and amble up to the beach bar, order a beer and some octopus salad and plonk myself down at a table overlooking the beach. Fearless lizards scuttle around my feet whilst a caged canary provides a sing-song backdrop to this black paradise.

Nobody rushes here except the waves; it’s one of Tenerife’s most chilled out beaches and is all the better for its lack of manicured appearance and slightly wild feel. I take a refreshing sip of beer and consider exploring the path above the beach to the other two natural coves in the area. Or maybe that should be “˜au natural’ coves as etiquette demands that I should remove all clothes before joining the other beach bums. On second thoughts, maybe I’ll stick at Bollullo with my beer ““ for everyone’s sake.