Has it been a year since the ladies European tour players have been in Tenerife ? It seems like only yesterday when I was at Buenavista golf course in the North of the island watching Trish Johnston lift the Tenerife Ladies Open 2010 trophy.

This year the tour is back down in the sunny South of the island at the very beautiful Golf Las Americas Golf Course which is situated right in the heart of the popular tourist destination of Playa de Las Americas many visiting tourists will be blissfully unaware that a golf course actually exists just yards away from their hotel entrance.

England’s Laura Davies will be playing 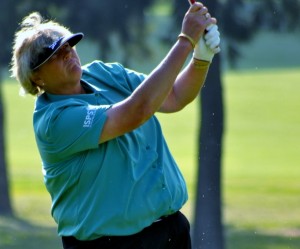 The Tenerife Ladies Match play tournament is new for this year in Tenerife rather than a full tour event due to the economy being the way it is. The main sponsors being The Tenerife government, have opted for a more low cost option of the Match Play format which is still attracting the very best of the Lady European Tour players to participate.

The tournament starts officially on Wednesday the 8th June with a day of official practice for the players.

The 9th June is the Pro-Am in which the play order is for the first elimination round which is on the 10th this is decided by the players score on the day.

The 10th and the 11th are two days of Match play with the final day on the 12th being a stroke play day for the last surviving 8 players from the original 32. The event is being televised by Canal Plus, Teledeporte and Sky Sports with sports reporters from all over Europe attending the event. Tenerife Magazine is a chosen media partner for the event and will be on hand every day with pictures and stories live from the event. We can be followed on Twitter and on Facebook

Las Americas Golf Course I am sure will make an excellent host course. Having had the experience of hosting a Ladies European tour event in the past. Its also a fantastic venue in regards of location for superb hotel accommodation, restaurants, beaches and nightlife.

Public entry to the event on all days is free with ample car parking and catering facility’s on site. So I hope both residents and tourists will support the event and come out to the course and see the very best Lady golfers in Europe do what they do best “¦ Play Golf!